Lauren Page is the reason the charity was formed, the inspiration for its continued success and she is why thousands of mothers and babies will continue to benefit now and in the future.

Her short life and her struggle to survive against the odds inspired her parents Nick and Claire to set up the Lauren Page Trust with the help of friends and family.

Their first son, Ben, was born nine weeks early after what had been a difficult pregnancy. He was just 3lbs at birth and spent seven weeks in the Special Care Baby Unit (now known as the Neo-Natal Unit) at Whipps Cross.

He is now a healthy, high achieving young adult. By the age of 18 he measured six feet six inches tall. We suspect he may not grow any more but we can't be sure! But Ben's birth was a stroll in the park with what was to come for Claire when she fell pregnant again when Ben was 17 months old.

Following Ben's birth Claire become seriously ill with what was later diagnosed as Sarcoidosis along with various renal problems.

When she became pregnant with Lauren, she was referred to Dr Catherine Nelson-Piercy, then the obstetric physician at Whipps Cross Hospital, East London.

Having a baby would always present a risk and by 18 weeks into the pregnancy Claire had been admitted to Whipps four times with threatened miscarriages, severe haemorrhaging and constant infections until she was kept in until the birth.

After 24 weeks she was transferred to Kings College Hospital on the other side of London. At 27 weeks Lauren's heart rate was barely registering and Claire had developed pre-eclampsia, along with everything else, so doctors performed a crash caesarean section.

After Lauren was born, doctors warned she may not make it through the night but she pulled through the first two nights by which time Claire was well enough to see her for the first time.

Early on her third day Lauren suffered a massive brain haemorrhage and Claire and Nick were given the option to turn off her life support machine. They did not, deciding that if Lauren was prepared to fight then they should not give up on her, despite the risks.With the constant threat of not making it through the night, Lauren was baptised by Rev Alan Comfort in her incubator at Kings.

Lauren continued to fight against set backs and infections for the next eight weeks, needing two lumber punctures for a condition on her brain called hydrocephalus until she could be moved back to Whipps Cross and nearer to home.

On Christmas Eve Lauren was rushed from Whipps Cross to the Western Eye Hospital. Blood vessels in her eye had burst which meant she would have grown up with extremely poor sight and even blindness.

Yet at 13 weeks old she was allowed home with no tubes and monitors.

Even then she needed constant help maintaining her temperature and even needed waking to feed. She suffered from fluid on her brain which would have caused severe headaches and needed cuddling to sleep again. On one of these episodes, on March 2nd, Lauren died in Claire's arms.

Her struggle inspired Nick and Claire - and Ben who had been through so much so young - to make it their fight to do whatever they could to prevent others going through the same experience.

This ranges from supporting the medical staff who provide help, creating more doctors and physicians in an area sadly lacking in specialists and providing equipment for hospitals to funding vital research into the causes of illnesses which cause mothers to give birth prematurely and how this can be prevented.

From a personal point of view, running the charity helps Nick, Claire and Ben come to terms with what happened. It also gives more purpose to Lauren's short life, it recognises the fantastic attitude of the doctors and nurses involved and it can create something positive from what all they have endured.

Catherine Nelson-Piercy and the Rev Alan Comfort became patrons of the charity. Their help, advice and support has been invaluable. And they're nice people too!

We do not want this story to upset you but give you some understanding of why we do what we do. It is meant to bring hope, not sadness.

For thousands of other mothers and their babies throughout the country, we want the charity to ensure they will never have to go through this experience. And with your help, they will not. Your donations have trained specialist physicians, bought lifesaving equipment and funded potentially groundbreaking research. Already, hundreds of mothers and babies have benefited and thousands more could do so in the future. 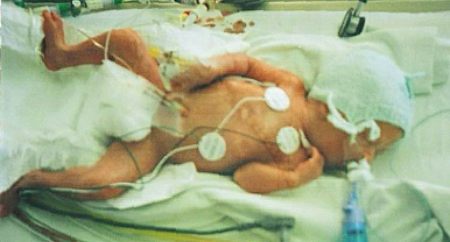 Donations can be made by filling in a Gift Aid form. When completed please post to the address provided.